Both of the photos above were what I got last Saturday –

Bottom Pic:
– mandarin oranges (seriously, I’ve gotten these in my box from the same farmer every week for Months!  This guy has some serially productive trees!)
– valencia oranges
– rutabagas
– carrots (hidden under oranges, but they’re there, I promise)
– daikon radish (also hidden under oranges, but also there)
– potatoes
– cabbage
– and oh yeah, strawberries!

I was gonna have some kitchen fun this weekend, except that Hubby is, well, basically rebuilding my car, and . . .

. . . since my default setting is worry these days (it’s a just-post-cancer thing – hopefully this too shall pass, in its own time, of course, as is right and proper) . . .

. . . I decided to hang out with him, keeping him company, watching over his safety (I Already know he would Never knowingly compromise his safety Or let me drive a car that wasn’t safe), making sure he got fed, and generally being his parts bitch when necessary.  Oh, and starting to knit a fantastic grey cowl (I know – the weather’s getting warm now, but for some reason I seem to a be a cold-weather-only knitter – shrug) for myself when parts-bitch-service was not required!

Hopefully those beautiful strawberries will survive long enough to be made into Roasted Strawberry Buttermilk Cake, but if they don’t, they’ll likely end up overripe and supersweet gracing some oatmeal or greek yogurt. 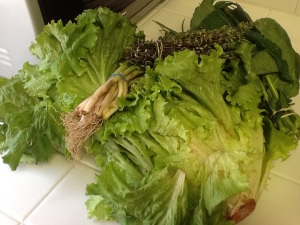 Yep, you read that right.  I’m of the era (and I can’t find the post on Facebook that spells it out though I’ve shared it on my own timeline) that talks about being thrown out of the house in the morning to play until I got hungry enough to come back for lunch, and then again in the afternoon until the streetlights came on, at which general time it was getting dark and time for dinner.

[Updated January 10, 2013: I found it on FB yesterday – this is the graphic I was thinking about: 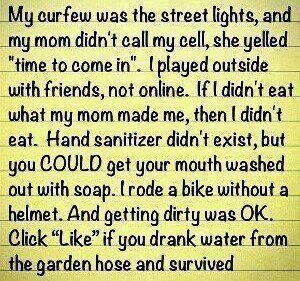 Part of growing up in that era is that as kids we ended up eating a little dirt.  Our moms didn’t hover to the point that anything dropped on the ground was scooped up and washed with soap or alcohol before being given back.  We picked it up again, put it in our mouths, and consequently ended up eating some dirt.

Well, I’m Back to eating some dirt and it’s a good thing.

For years I’ve been seeing these organic produce delivery services generally in Southern California.  Unfortunately, I live enough on the edge of town (but still actually In town, mind you) that nobody has yet been willing to deliver to my house.  Hopeful click by hopeful click to each new website promising to bring organic family farm veggies to my door, and nada . . . until Abundant Harvest Organics.

Found them a couple of weeks ago.  Turns out they have a Saturday distribution center at a local community college, and Even Better, some enterprising lady has decided to make few extra bucks ($5 per week) picking up at the distribution center and delivering to local homes – including mine!  🙂

So, for $22.xx (plus $5) delivery per week, every Saturday morning a small box (supposed to be enough for 2 people for a week) shows up on my porch.  I’ve been very impressed and wanted to share.

Both of the photos above were what I got last Saturday –

Each delivery also comes with a single, double-sided flyer talking about the items in the box, which farmer grew what, and offering up recipes to make with them.  This post is not meant to be an advertisement necessarily, but if you’re interested and live in CA, hit up their website and see if they deliver near/to you.

Looks great, right?  First thing I did was have a slightly gritty salad.  I took half of one of those heads of lettuce, carefully washed and dried it (I can see I’m gonna need a salad spinner and soon!), cut it up, added some other stuff and chowed down.  I swear I washed it carefully and still had a couple gritty bites and I don’t care.

I really love that this food Looks like it was in the ground where it was grown probably no more than a couple days before it landed on my porch.

I’m glad to be back eating some dirt.

As time goes on, if I’m so moved, I’ll share some of the dishes I make with my beautiful, organic, local-family-farm-grown produce.