I happily live in an all-Apple household electronically (where possible): iPhones, iPads (both of which I’m really never without), MacBooks (of different flavors), Apple wireless equipment and a Nest thermostat (not technically an Apple product, but designed and manufactured by a former Apple employee and built with the same competent user-friendliness and design aesthetic as Apple products).  For more information on the Nest, see here.

Before iPads existed, I had a Kindle and a Nintendo DS, both of which got sold when I got my first iPad.  Since then, I’d entirely given up paper books.  With the various reading apps at my disposal, I was perfectly happy to give up the weight of multiple books, the choice of which ones, and the worry (whether traveling, which I’ve never been able to do as much as I’d like and am doing none of now, or just heading to work for the day and knowing I’ll be able to read at lunch) of finishing one book without having another to start (getting the impression “hand over the books and nobody gets hurt” yet?) – for having all my books with me at all times, and the ability to get a new one anytime, anywhere, all in a package a little more than a pound in weight that will stay on all day long.

No, this isn’t an ad for an iPad, but I do warn all you Apple haters, anti-Apple comments will not be approved.  🙂  This is my playground and I make the rules.  No, this is about me and books.  Bear with me, I’ll get there (or not if you prefer, skip ahead or bail entirely – your choice).

Anyway, I figure as long as I don’t spend the mortgage payment on books (which, so far, I’ve managed to restrain myself from doing) it’s a harmless, even a positive addiction.  Ask any English teacher.

I knew when the prospect of surgery came up, I’d be stuck at least at home, if not in bed, for a while, feeling very not myself.  It was a given.  What I had not counted on amidst significant other preparations (kitchen full of comfort food, laundry done, house tidied up, surgery specific clothing and supplies bought and packed in case of an unexpected hospital admission) was how physically weak I would actually be when I came home.  Part of that was not knowing precisely how extensive the surgery would have to be – which is a normal result of not being able to fully know until my CSurg actually got in there.  Turns out she had to remove more than any of us had planned, since the tumor turned out to be 50% bigger than multiple tests had led us all to believe and then she had to make sure she got clean margins, including part of the chest wall because of the tumor’s proximity.  All together (although a slightly more ovoid, less round shape) the amount of tissue that had to be removed is about the mass of a hockey puck.

But I digress, again…See the upcoming post “A Tornado In My Head.”

Okay, getting back on track here…I was surprised the morning after my first surgery that my iPad was too heavy to hold onto with my left (surgery) hand – at less than a pound and a half!  But holding it in my left hand actually hurt!  Luckily it was Mom to the rescue…

Now this plot detour is intentional – let’s talk about Mom.  I am as unlike my Mom as a natural-born child can be from a parent.  Most of my life I would joke that it’s a good thing that the women in this species bear the offspring, otherwise we’d wonder who my mother was.  I look like, think like, and have the same tastes as my Dad’s side of the family (there are some seriously strong genes over there).  As I’m getting older I do find a few more ways I’m like my mom (yes, yes, move along, nothing to see here); I think adding the 3 physical traits we’ve found we’re now up to a grand total of maybe 9 similarities.  That overwhelming amount of difference between us has meant that Mom and I haven’t necessarily had the relationship I was socialized to expect, or one as close as either one of us wanted it to be.  Often, Mom and I simply don’t speak each other’s language.  And yet even when I’m pissed at Mom, when our communication has broken down yet again, there is one thing I will always admire about her and be thankful for: she is a spectacularly good caretaker of someone in (even an extended) crisis.

At least with me (and from who else’s perspective can I really see this anyway?), she has a wonderful way of being very attentive, and yet unobtrusive – allowing the crisisee (a new word I just made up for fun) to rest as needed, without the pressure of having to “entertain a guest,” and yet being instantly there to make a meal, get some meds, or refill a glass of water.  Mom has a sense of the right distance to allow the crisisee to test her limits as they improve over time, but is still close enough to be a safety net if the crisisee overreaches.  It’s a hard thing to describe – I think you’ll either get what I’m trying to convey or not.  In any case, my Mom rocks!

So it was that the day after my first surgery my Mom showed up at my house with a stack of paperbacks she had already read.  They were perfect: the kind of light chick lit that would keep me occupied while my body healed some, but nothing I had to really concentrate on or remember.  In retrospect, the first surgery wasn’t too bad – went into it full strength, they only worked on one side – I was hanging out downstairs the very next day.  Not feeling great by any means but not needing to be in bed.  And awake enough to read…alot…4 books in the first 4 days.  Everyday Mom came up to hang out that week there was another book waiting for her to take home (this was before she told me to just pay them forward).  And a few days later, I could deal with the iPad for a bit to check email and Facebook, but still didn’t want to hold it for reading – too heavy.  I ended up reading paper books the whole time between the 2 surgeries (exactly 14 days apart).

So, the Sunday before surgery #2, Hubby and I were going through a similar drill as for surgery #1 – filling the fridge, making sure anything I might want to wear was clean, tidying up the house, packing a bag as insurance against an unexpected hospital admission (which worked both times, btw) and…

He floated the idea of getting me a Kindle again so that should I have the same experience with the second surgery (or worse, since the second time we were working on both sides) I could read when I was up to it with something even lighter than the paperbacks I had been holding.  So, we headed over to Best Buy and picked one up, went home and charged it up, and tucked it into the packed bag.

Let me tell you it was a godsend.  The second surgery was much harder than the first one!  Working on both sides, not just one.  I wasn’t even close to fully recovered from the first one – which was actually deliberate but also made things more difficult.  And the procedures that were done were just inherently more traumatic to the tissues than ones in the first surgery.  Let’s just say I was basically in a narcotic fog for the first two days after the surgery.  There were still short periods when I wanted to read (I read myself to sleep every night, so it was the perfect thing to do while waiting for the next dose of pain meds to kick in and send me blessedly back to dreamland), but I’m not sure I could have dealt with a book then.  Thankfully I didn’t have to.  I had my Kindle.  I could just prop it up against a pillow and use a single touch to turn pages until my eyes closed again.

No, this is also not meant to be an ad for a Kindle (but if you want one I’ll make it easy, click here).  It’s more about how Hubby takes good care of me too, and yay, I got to have my books still even though I was in considerably worse shape the second time around!

Anyhoo, both Mom and Dad (where’d you think I got it from anyway?) Always have a book with them.  Last week at one of my many appointments Mom was reading a book I said I wanted to read when she was done and I may post a review of it eventually: 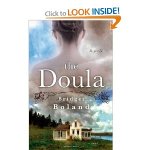